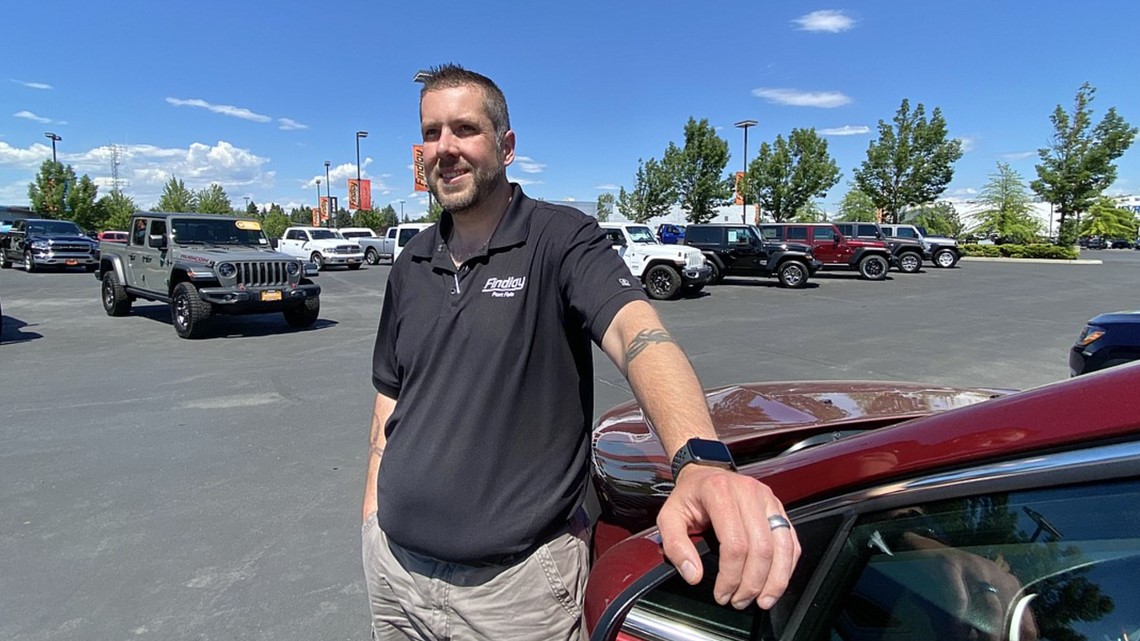 POST FALLS, Idaho — If you’re looking to purchase and drive a car straight off the dealership lot today, good luck.

A shortage of available parts has slowed manufacturing down by months as reported by our news partner, Coeur d’Alene Press.

During a Post Falls Chamber of Commerce event Wednesday, Charlie Walters, general manager of the Findlay Chrysler Jeep Dodge Ram dealership, said the shortage stems from a series of global challenges that began with COVID-19.

“Back when COVID first hit, all of a sudden, we saw a drop in demand, and no one knew what to expect,” Walters said.

At the time, inventory was high, he said, cars sitting on lots ready for purchase. Once those cars are purchased, they are dealership-owned and financed through what is called “flooring,” Walters explained.

According to the National Independent Automobile Dealers Association, flooring is a “revolving line of credit” where a dealer “repays the debt as they sell their inventory and borrows against the line of credit to add new inventory.”

“We’re paying interest on all those cars, and that becomes a big expense when you’re not selling cars,” Walters said. “All the dealers were trying to sell down their inventory by not taking more from the manufacturers. So, all the manufacturers decided they’re going to stop ordering the parts to build the cars.”

A significant player in the automotive shortage is semiconductor chips used in new vehicles for infotainment systems, safety features, power steering and brakes. The number of semiconductors needed for a car varies depending on the model and amenities, Walters said. Hybrid electric vehicles, for example, can contain up to 3,500 chips, according to the U.S. International Trade Commission.

Then, the market changed.

“All of a sudden, the government starts handing out money. People are no longer going on vacations, they’re not going out to eat, so they’ve got all this money that they normally would be spending in other ways,” Walters said. “They figure it’s a good time to get a new car, and demand goes way up.”

The rapid turn in the market wasn’t expected by manufacturers that had stopped ordering parts for several months. Even when some factories reopened, Walters said, many former vehicle semiconductor manufacturers didn’t return to the industry.

That led to a further backlog and, in turn, a lack of available inventory across the globe.

“In June of last year, we had over 100 new vehicles in stock that I was paying interest on, and that was after selling down our inventory,” Walters said. “As of this morning, I have 26. It’s that way at dealerships all across the country.”

Findlay Chrysler Jeep Dodge Ram operates 32 stores in six western states, Walters said, all with about 25% to 50% of the inventory they would like to have. To continue to serve customers, Walters said the dealership has now increased online order requests.

“I have over 300 vehicles on order right now. But, unfortunately, when people come in, they can’t find what they’re looking for anywhere, so they’re just ordering cars,” Walters said. “I’ve got trucks that we ordered last September that we’re still waiting on.”

The backlog has forced several automotive companies to report a cut in planned production. For example, General Motors estimates the chip shortage caused the company to cut about 278,000 vehicles — or over $2 billion — as GM keeps certain lines closed to prioritize more profitable models like the Chevy Silverado and Chevy Tahoe.

The company continued to build vehicles without the semiconductor chips, said Eve Knudtsen of Knudsen Chevrolet, and housed them around the country until supplies became available. Now that chips are returning to the market, so are GM products, she said.

“The vehicles that they built without microprocessors are having those chips put in and sending them to us,” Knudtsen said. “I got a report about a week ago of 25 Chevrolet Colorados that were on their way to me.”

By prioritizing the vehicles in highest demand, including the Silverado, Tahoe, and Colorado — which coincides with Knudtsen’s popular models — she felt her dealership has stayed strong in a time of uncertainty. Recently, most cars are sold before they hit the lot.

“On May 1, I started with 39 new vehicles on the ground for sale, but I wound up selling a total of 124 new vehicles by the end of the month. One might say, how does that happen?” Knudtsen said. “We always have vehicles on the way. Now because of the demand, people are coming in and buying them up before they are delivered. So they never hit the lot.”

The massive rise in demand was a surprise to Knudtsen, who believed that business would have to be rolled back at the start of the pandemic. However, Knudtsen Chevrolet learned from the financial downturn in 2008, the owner said, so there was already a crisis plan prepared when the pandemic hit.

“The good news is the steps we took seem to be the right steps so far,” she said. “We’ve been around a long time, so we’re pretty solid in every area of operation. We made the conscious decision to build ourselves that way so that if one area takes a hit, everyone else keeps chugging across the sea.”

A lack of inventory has its repercussions, particularly on pricing, Walters explained. According to a January 2021 Kelley Blue Book report, the average transaction price for a vehicle in the U.S. eclipsed $40,000 this year — an increase of over $2,000 from January 2020.

The rising cost of new cars and lack of inventory is also causing used car prices to reach new highs. Used car Manufacturer Suggested Retail Price (MSRP) — also known as the sticker price — jumped nearly 30% between May 2020 and May 2021, according to the U.S. Bureau of Labor Statistics, which means that the value of used cars is appreciating.

“I’ve seen dealers that are paying original MSRP at an auction for a vehicle that’s three years old,” Walters said. “The average listing price of a used vehicle is now just under $24,000. That’s a 22% increase over the prices in the last couple of years. So the price of used cars is going up faster than the price of new cars.”

“Just because it doesn’t look like we have the inventory to sell or trade, we do,” she said. “Just because you don’t see it on the lot or our website shouldn’t prevent you from giving us a call.”

Walters said abnormalities in the automotive industry will remain until manufacturers can meet demands, which could be a while.

“It’s going to be at least the end of this year before there’s any realistic expectation of getting caught up,” Walters said. “Most likely, we’re going to keep seeing delays in some components until 2023.”

Coeur d’Alene Press is a KREM 2 news partner. For more from our news partner, click here.

Car chip shortage to abate, smartphones could be next: industry execs
By Lisa Pauline Mattackal and Aaron Saldanha(Reuters) - The semiconductor shortage that has gripped the world could last well into 2022 and hit smartphone ...

1934 Riley MPH Roadster Is A Pre War Show Car
⚡️ Read the full article on MotoriousYou can own the 2021 Amelia Island Concours d'Elegance Best in Class titleholder!Known today for their sporty and ...
Car & Automotive