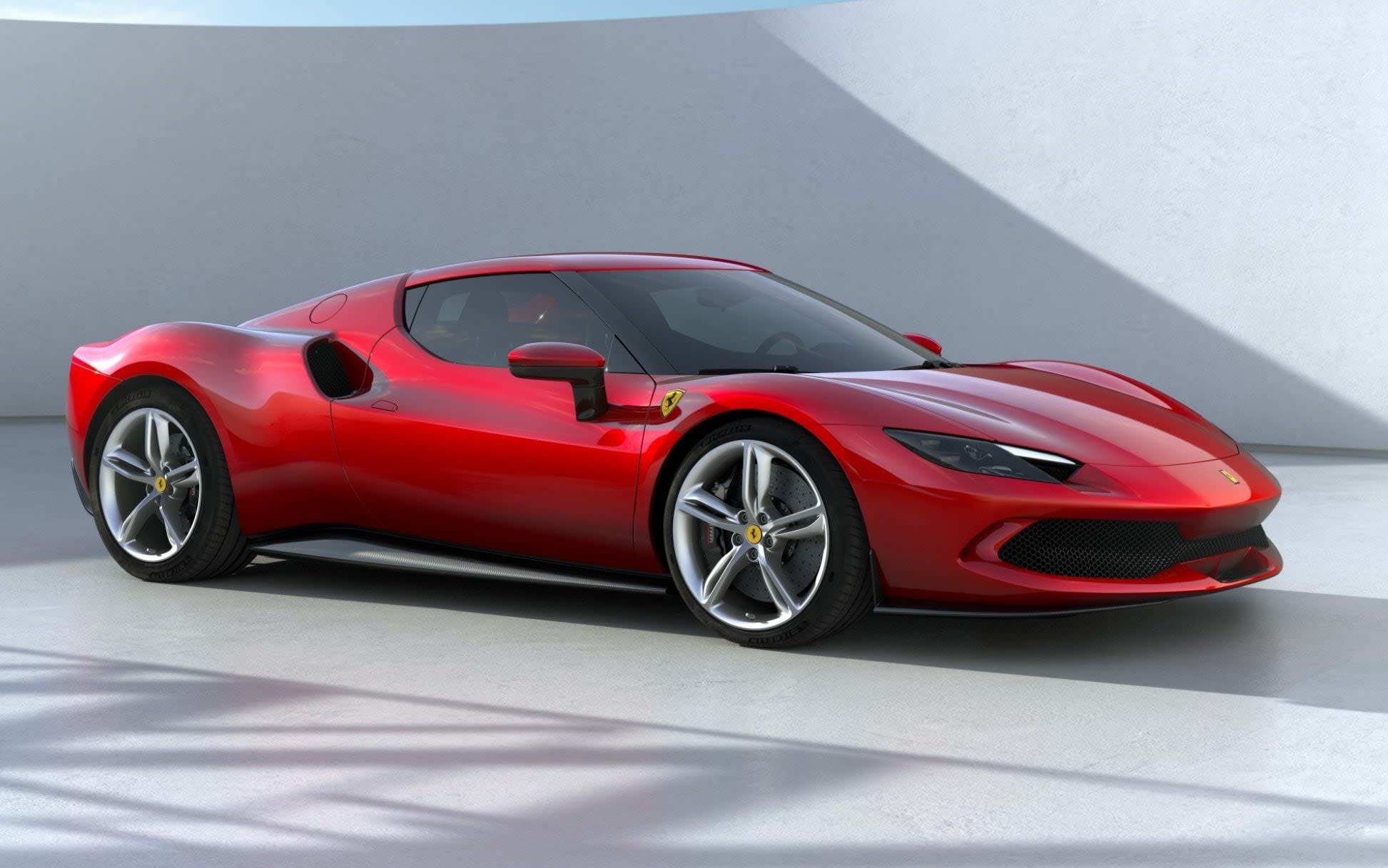 Perhaps one of the automotive world’s worst-kept secrets, a new V6-engined Ferrari, has been revealed at a global online debut.

The 296 GTB mid-engined coupé is expected to go on sale early in 2022 and uses a new plug-in hybrid drivetrain combining a 3.0-litre, twin-turbocharged V6 petrol engine and a battery-driven electric motor together capable of developing 818bhp.

Ferrari’s marketing boss Enrico Galliera said that cars for other markets, including right-hand-drive UK models, would follow “some time after”, although the company declined to suggest a likely date.

The claimed electric-only range of the two-seater berlinetta is 25km (15.5 miles).

The 296 GTB is not Ferrari’s first hybrid car. That accolade went to the limited-edition LaFerrari hypercar, followed by the series production SF90. Both of these have four-wheel drive, courtesy of an electric motor driving the front wheels.

By contrast, the 296 GTB’s 654bhp petrol engine and 164bhp electric motor drive the rear wheels only.

Ferrari has previously announced that it is likely to have a pure electric car on sale by about 2025, five years before the ban on the sale of new petrol- and diesel-engined cars comes into effect in the UK.

The 296 GTB is pitched as a machine to deliver driving pleasure, rather than provide outright performance as with the SF90, although a top speed in excess of 205mph and 0-62mph acceleration in only 2.9sec means it’s not exactly slow.

Its styling is described by Ferrari’s chief designer Flavio Manzoni as combining elegance and sportiness although, with the car standing in isolation, my initial thought was that they’d simply shrunk the 488 GTB of six years ago. Yet it is markedly sleeker all round, while the pronounced haunches at the rear hark back to past Ferrari greats.

It’s a mercifully clean and discreet design, devoid of massive wings and spoilers, although there is a spoiler running between the rear lights that deploys above a certain speed to provide extra downforce.

The interior includes what Ferrari describes as a “full digital interface”. We often bemoan the proliferation of potentially distracting touchscreens in modern cars, so the fact that this is designed so that the driver keeps his hands on the steering wheel and his eyes on the road is to be applauded.

Along with the newcomer being more compact than its existing models, Ferrari says it has worked hard on weight reduction to compensate for the relatively heavy drive battery.

The 296 GTB is claimed to be extremely agile thanks to a shorter wheelbase than the existing line-up, while the heaviest components such as that battery and the petrol engine are mounted as low as possible to reduce the centre of gravity.

Ferrari is at pains to point out that the 296 GTB does not replace the existing mid-engined F8 Tributo or the front-engined V8 cars and that the new V6 complements the line-up and is not intended to replace Ferrari’s V8 range.

There will also be a performance version called the Assetto Fiorano (after Ferrari’s test track across the road from the factory at Maranello), priced at 302,000 euros (£259,000) in Italy.

It is even lighter than the standard GTB and has a special aerodynamics package for increased downforce during circuit work.

Finally, history buffs might venture to suggest that the 296 GTB is not Ferrari’s first V6, although the 246 GT produced from 1967 to 1974 was actually badged Dino, in honour of company founder Enzo Ferrari’s late son.

For new and used buying guides, tips and expert advice, visit our Advice section, or sign up to our newsletter here

Ferrari Is Racing Into Fashion
Last weekend, 100 of the Italian style world’s journalists and tastemakers were chauffeured in black vans to the Ferrari headquarters, a soaring glass factory ...