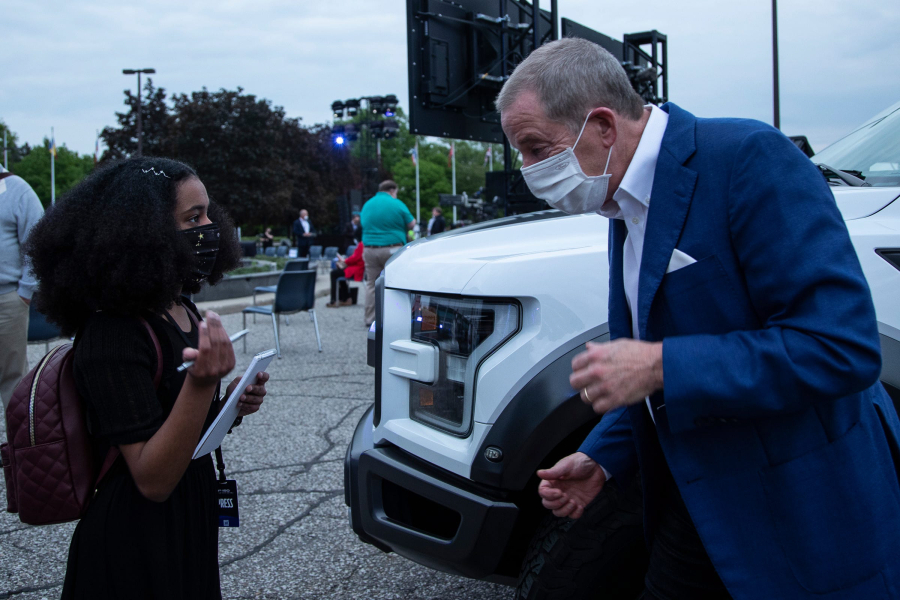 Ford drops use of ‘chairman’ title, adopts other gender-neutral language

Ford Motor Company notified federal regulators that the 118-year-old automaker has officially replaced the use of “chairman” with “chair.”

And they’re not the only ones making language changes.

The Board of Directors voted on July 8 to amend Ford’s bylaws effective immediately and adopt gender-neutral language throughout, including the title “chair” in place of “chairman” as well as various others revisions. The company filing with the U.S. Securities and Exchange Commission dated July 9 shows the actual editing of the original company document with the use of markups.

Ford spokeswoman Marisa Bradley told the Free Press on Monday, “Our roles at Ford aren’t gender-exclusive and these changes help limit ambiguity, and drive the inclusive and equitable culture we’re striving for.”

The company had to file notice because it’s publicly traded and investors must be alerted to any modifications to bylaws, regardless of what the updates are.

Back in mid-March, JPMorgan Chase & Co. updated its bylaws to reflect gender-neutral language, replacing “chairman” with “chair” and gender-specific pronouns like “he” and “his” with non-gender-specific terms such as “director.”

The largest U.S. bank “scrubbed its gender designations as pressure grows from both society and investors on global businesses to show they are diversifying and becoming more inclusive,” Bloomberg reported.

This is part of an ongoing pivot from non-corporate gender-specific terms such as fireman, policeman, stewardess, mailman and waitress to firefighter, police officer, flight attendant, mail carrier and server.

Meanwhile, General Motors is no longer using “chairman” either. Spokesman David Barnas, company spokesman, said the automaker made the transition back in May. While the bylaws haven’t been changed or submitted to the SEC, company protocol has changed and the updates are made on the GM website.

“Mary Barra’s title adjustment from chairman and CEO to chair and CEO is just one of many changes at General Motors in our journey to be the most inclusive company in the world,” Barnas said.

In 2015, when Barra was named CEO and chairman, the New York Times made news for breaking rank and choosing instead to refer to her as “chairwoman.” But the company stuck with chairman at the time.

“Leading news outlets, ranging from the Wall Street Journal to Automotive News to Forbes.com, had no problem using Barra’s actual new title. News organizations typically these days will refer in gender-neutral fashion to a ‘chair’ or ‘chairperson,’ but that’s not what the Times did,” Forbes said in 2016.

GM spokesman Pat Morrissey told reporter Dale Buss that company leaders did engage in some “discussion around the title. But the standard practice as evidenced by the numerous women on the Fortune Most Powerful List indicates the official title of chairman is the accepted practice. This was approved by the board.”

In March 2021, Stevens Institute of Technology in Hoboken, New Jersey, advised in its Editorial Style Guide, “Use the term ‘chair’ wherever possible instead of chairperson, chairwoman or chairman.”

In January, the U.S. House of Representatives modified language in its Code of Official Conduct for the House to be less gender-specific, changing “chairman” to “chair” and other terms including “seaman” to “seafarer” and “father” to “parent” and “daughter” to “child.”

Earlier this year, the White House added gender-neutral pronouns that people could select when contacting the U.S. government, Reuters reported. And LinkedIn, the professional networking site, announced plans to let users add their preferred gender pronouns to accounts in the U.S., Britain, Sweden, Canada and Ireland. Some professionals identify as “he” or “she” while others may prefer “they.”

“Clearly members want to feel empowered about how they self-identify,” Bef Ayenew, head of engineering for identity and profile at LinkedIn, told Reuters in March. LinkedIn has 738 million members in 200 countries and regions worldwide.

In addition to executive terms, Ford noted in its federal regulatory filing that the bylaws were last updated on Feb. 11, 2015. Other updates included:

While many in corporate America are focused on language that reflects inclusivity, Tesla CEO Elon Musk made headlines in mid-March for a different approach. He notified federal officials that he would add the title “Technoking of Tesla” and Chief Financial Officer Zach Kirkhorn would be known as the “Master of Coin.”

Musk once had the title of chairman of Tesla, but he was stripped of that title in 2018 in a settlement with the SEC over deceptive tweets he sent out, CNN reported. The SEC originally sought to strip him of his CEO title but settled for having him pay a $20-million fine and give up the chairman title instead, a position now held by Robyn Denholm. The Tesla website uses both “chairman” and “chair” in reference to Denholm.

Ford, Chevy and Jeep among automakers hardest hit by chip shortage
In brief: The ongoing semiconductor shortage has hit the tech sector especially ...

Henry Ford III to leave job at Ford Motor Co., remain on board
A spokesman said his investor relations role is being filled internally. Ford didn't say in the email where his next job would be. Ford's roles ...