Skip to content
Early cars were mostly A-to-B carriers so comfort wasn’t a major concern until luxury cars became widely available in the 1920s. But even so, mobile radio technology didn’t become commercially viable until 1930. It was still expensive though, with the first radio units costing one third of the price of a compact car.

AM radios eventually became a standard feature toward the end of 1930s, while AM/FM units with a scan function arrived in the early 1950s. While having an in-car radio was a big thing at the time, drivers were at the mercy of radio DJs for music. So carmakers and audio companies started looking into ways to incorporate mobile players for physical media.Rise of the LPs
Back in the 1950s, LP records were the only physical sound storage medium. Vinyls had become common in the 1940s and remained the only viable sound storage medium until the tape cassette was introduced in 1963.

A technological breakthrough, vinyl made music easier to listen and, more importantly, to own. Naturally, the first attempts to introduce in-car audio systems were made with vinyl records. Chrysler was the first company to go through with it and offer an in-car record player.

Developed by Peter Goldmark, the man who helped develop the microgroove 33 1/3 rpm phonographic disc, which we know call a vinyl record, during his time at CBS Labs, the in-car record player was introduced in 1956 as the Highway Hi-Fi.Groundbreaking technology
The technology was a bit different than the usual record player and it was actually incredible. It was designed to play at half the speed of a regular LP record and the discs featured twice as many grooves. While regular records were able to store 45 minutes of audio material in total, Highway Hi-Fi vinyls allowed one hour of music per side. That’s a full two hours in total.

The bigger capacity of the Highway Hi-Fi vinyl was ideal for car use. Changing a big vinyl disc while driving was a no-no, so with Highway Hi-Fi drivers could enjoy one hour of music without having to make a stop to change the side or put a different record into the player.

But like most cool in-car features, it was very expensive when it first became available. The record players were optionally available for a variety of Chrysler, Plymouth, Dodge, DeSoto, and Imperial models, but they were priced at $200. That was more than 10% the cost of an entry-level model from most of those brands in 1956. And the equivalent of around $1,700 today.Not so many titles to choose from
But you could at least listen to any music you wanted instead of having to browse through the radio stations, right? Well, not exactly. Because regular LPs did not work with Highway Hi-Fi (and they didn’t even fit in the player), buyers were restricted to the titles that were made available.

These special vinyls were made by Columbia Records based on an exclusive deal with Chrysler, so owners were limited to those LPs and the artists that were signed to that label at the time. They basically had to listen to the records that Chrysler and/or Columbia wanted edited.

For instance, an Elvis Presley fan couldn’t listen to his favorite artist on the Highway Hi-Fi. The “King of Rock and Roll” was signed to RCA. The same goes for other legendary artists of the era like Chuck Berry and Little Richard. In short, the technology didn’t have a lot of support.A revolutionary flop
But the high sticker price and the limited music catalog weren’t the Highway Hi-Fi’s only issues. The players weren’t very reliable either. And once they stopped working, owners had to go to the dealer since the technology wasn’t available outside Chrysler circles.

What’s more, because the player’s tone arm was engineered to apply a higher than usual tracking force to keep skipping and skating to a minimum, the records had their grooves worn down rapidly, rendering the LPs unplayable after just a few spins.

As a result, the Highway Hi-Fi system was short lived. Introduced for the 1956 model year, it was discontinued in 1958. By 1957, Chrysler had slowly began to pull support for the technology due to high warranty service costs and complaints over the limited number of available titles. It was all back to the good ole radio.Some sort of cult following
But Chrysler wasn’t the only company that created record players for cars. RCA, another popular label at the time, manufactured its own player. Unlike the Highway Hi-Fi, it played standard 45-rpm, seven-inch records and it was offered to various carmakers.

But since seven-inch LPs can include only a few minutes of music on each side, this record player was an even bigger failure than Chrysler’s. It was offered from 1960 to 1961 only. Two years later the tape cassette was invented and the technology quickly became the standard for in-car audio systems.

Although completely forgotten by most, Highway Hi-Fi is now a collectible among hardcore Chrysler fans. Working Highway Hi-Fi units are known to cost thousands of dollars and don’t stay up much on eBay and other market places. Playable records are also rare and can cost in excess of $100 a pop.

While vinyl records have becoming increasingly more popular in the last 15 years (LP sales surpassed those of CDs in 2020), the technology will likely never return into cars. And it shouldn’t anyway, as the digital format is far more appropriate for automobile use in terms of reliability, availability, ownership, and even cost. 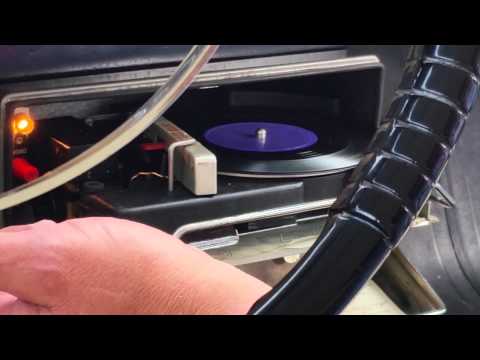