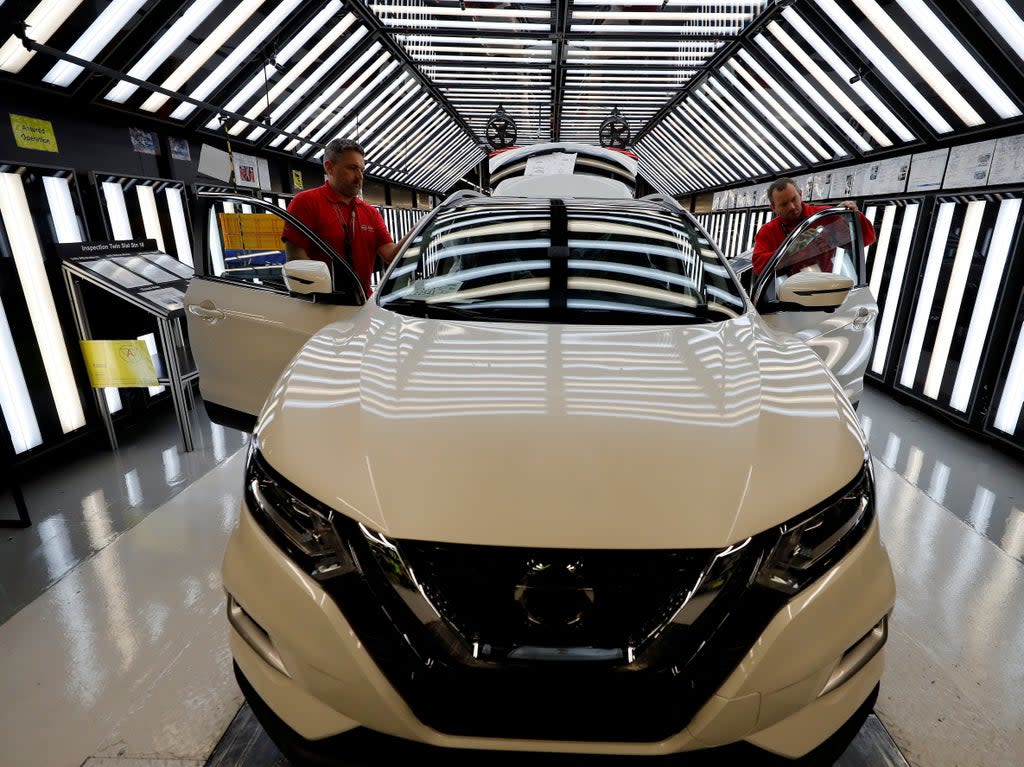 More than 1,600 jobs as Nissan to build new electric model and huge battery plant in UK

Nissan is to build a new electric model and huge battery “gigafactory” in the UK in a massive jobs boost to the automotive industry.

More than 1,600 jobs will be created in Sunderland and an estimated 4,500 in supply companies under an investment of £1bn – an announcement welcomed by the government and unions.

More than £420m will be invested in building a new-generation all-electric vehicle and Nissan said its Electric Vehicle (EV) Hub will be a world-first EV manufacturing ecosystem.

The Japanese car giant will partner with Envision AESC, a global company in battery technology, and Sunderland City Council.

There will be three interconnected initiatives bringing together electric vehicles, renewable energy and battery production, which Nissan said sets a blueprint for the future of the automotive industry.

Nissan president and chief executive Makoto Uchida said: “This project comes as part of Nissan’s pioneering efforts to achieve carbon neutrality throughout the entire lifecycle of our products.

“Our comprehensive approach includes not only the development and production of EVs, but also the use of on-board batteries as energy storage and their reuse for secondary purposes.

“Our announcement today comes out of lengthy discussions held within our teams, and will greatly accelerate our efforts in Europe to achieve carbon neutrality. The experience and know-how gained through the project announced today will be shared globally, enhancing Nissan’s global competitiveness.”

He said: “Nissan’s announcement to build its new-generation all-electric vehicle in Sunderland, alongside a new gigafactory from Envision AESC, is a major vote of confidence in the UK and our highly-skilled workers in the North East.

“Building on over 30 years of history in the area, this is a pivotal moment in our electric vehicle revolution and securing its future for decades to come.

“Commitments like these exemplify our ability to create hundreds of green jobs and boost British industry, whilst also allowing people to travel in an affordable and sustainable way so we can eliminate our contributions to climate change.”

Unveiling the Nissan EV36Zero at the Sunderland plant today, Nissan’s chief operating officer, Ashwani Gupta, said: “This is a landmark day for Nissan, our partners, the UK and the automotive industry as a whole.

“Nissan EV36Zero will transform the idea of what is possible for our industry and set a roadmap for the future for all.

“We reached a new frontier with the Nissan Leaf, the world’s first mass-market all-electric vehicle. Now, with our partners, Nissan will pioneer the next phase of the automotive industry as we accelerate towards full electrification and carbon neutrality.”

Responding to the announcement, the business secretary Kwasi Kwarteng said it was a “huge deal” for the company that has been in Sunderland for 35 years.

While the cabinet minister suggested a significant sum of financial support had been committed by the government to Nissan, he declined to give a figure citing commercial sensitivities.

“You will know we’re in conversations with lots of auto companies, there are lots of companies that are interested in investing in the UK, and it would be completely irresponsible for me to go into matters that are commercially sensitive,” he told BBC Radio 4’s Today programme.

Quizzed on whether he could confirm that the sum is significant, he replied: “It’s no secret that, across the world, governments are seeking to attract what is a once-in-a-generation opportunity.

“So that’s widely understood, and the British government has been involved in conversations of that kind. We’ve committed some measure of support, but the billion pounds they’re (Nissan) giving far outweighs and is far in excess of the amount of support that we have provided.”

Mr Kwarteng also insisted that Britain can hit a target of 2.3 million new charing points for electric vehicles by 2030, as the government seeks to ban the sale of new diesel and petrol cars by the end of the decade.

“We need to scale up exponentially the number of charging points and we’ve committed £1.3 billion to doing that,” he said. “If you look at things like offshore win, which I’m responsible for, there’s a huge increase in capacity. I think the way in which economies can transform is remarkable and I think nine years to hit those targets is sufficient.”

His opposite number and shadow business secretary, Ed Miliband, described the plans to build the new gigafactory in Sunderland as a “welcome announcement”.

“But ministers cannot be complacent,” he added. “Only this week, the SMMT [Society of Motor Manufacturers and Traders] said the government was falling behind our competitors and the Faraday Institution estimates we need seven gigafactories by 2040.

“That’s why Labour has said we would increase government investment from £400 million to up to £1.5 billion, part-financing three additional gigafactories by 2025.”

Mike Hawes, chief executive of the Society of Motor Manufacturers and Traders, said: “Today’s announcement of new investment into battery production in Sunderland is great news for the sector, the region and all those employed locally.

“It also demonstrates the UK automotive industry’s commitment to net-zero and that the transition to these new electrified vehicles can be ‘Made In Britain’.

“If we are to build one million electric vehicles by 2030, however, we need more such commitments, with at least 60 GWh of gigafactory capacity in this country by the end of the decade. The future competitiveness of our industry depends on securing these investments but also wider support for manufacturing.

“We need a Build Back Better Fund to help manufacturing transformation, as well as a plan for charging infrastructure that will assure consumers to make the switch to these vehicles.”

“Nissan and this incredible workforce were determined that Sunderland should lead the pack as we transition to electric vehicles and today they have delivered.

“They have battled for years to convince the government to support and invest in UK battery manufacturing, and today’s very welcome announcement will bring much-needed job security to the plant and thousands of new skilled jobs to the region.”

Guide to Remove and Replace Your Car Battery Safely
Changing your car battery is one of the easiest maintenance jobs you ...

Great Wall and Foxconn bet on Thai electric car market
BANGKOK -- As the global automotive industry undergoes a radical shift toward electrification, Thailand, the manufacturing hub of Southeast Asia, is emerging as a new ...