Bourdais hangs on to ailing car for the win 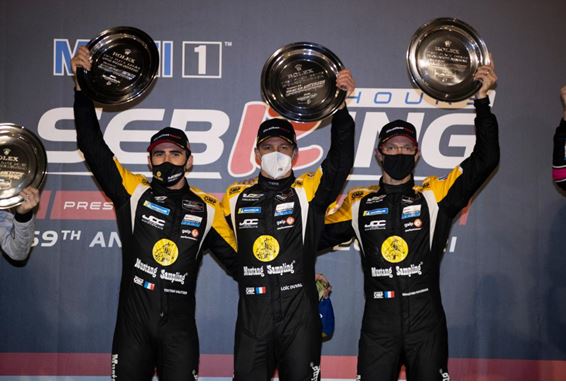 The race started with Pipo Derani taking the green from pole in the No. 31 Whelen Engineering Cadillac DPi-V.R. Derani was soon passed by Renger van der Zande in the No. 01 Chip Ganassi Racing Cadillac DPi-V.R. Forty-minutes into the race, Derani was hungry to get the lead back and went to the inside of Turn 17 and got squeezed into the wall when the 01 was forced over by a GTD car. Derani had to pit the 31 for repairs sending them down four laps.

Ss the race went on the top five DPi competitors exchanged the lead. When night fell, the No. 01 Chip Ganassi Racing Cadillac in the hands of Scott Dixon took the lead on the 3.7-mile, 17-turn central Florida circuit. The cool temperatures of the early evening favored the set-up of the Chip Ganassi Racing Cadillac. With just an hour left Dixon had contact while trying to make it to pit road taking them out of contention.

From the darkness arose the No. 5 Mustang Sampling Cadillac DPi-V.R with Tristan Vautier, Loic Duval, and Sebastien Bourdais. The team found pace in the night after recovering from a slow start. The JDC-Miller Motorsports team drove to the front leading the race in the last hour.

With just 36-minutes remaining the team made their last pit stop with Bourdais at the wheel. With 14-minutes left Bourdais radioed that the car was loose. The IndyCar champion and endurance veteran worked with the sway bar adjustments to make-up for the lack of downforce from a broken rear wing to bring the team their first win in IMSA DPi competition. 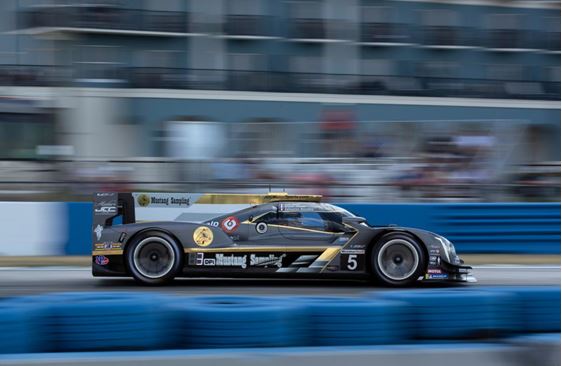 “At the start of my last stint everything was under control,” Bourdais said. “We were super strong at the beginning, went from P6 to P1. Our sequence of pit stops was very strong. We kept jumping people. I thought from then it was going to be easy, the Mustang Sampling Cadillac was really good. Then the rear wing fell off with 10 laps to go. That was the hardest 10 laps of my life.

The balance went way forward on the car. I compensated with the bars and brake balance. Still the car was unbelievably loose in the fast corners. I can’t believe we won it. Honestly, I could have crashed the car about 10 times. Especially before I figured out there was something seriously wrong. The rear tires started to degrade really bad. I was just hanging on. To stay in front of the field like this is one of my greatest achievements.”

After the pit in incident the Chip Ganassi Racing team made quick repairs returning van der Zande to the race who would cross the line fifth.

“It’s pretty frustrating,” Dixon said. “I’m not sure how – I know I hit the BMW on entry. It was a very late call for the pits, so I was scrambling to get everything undone in time. I was trying to turn back to get to pit road and there was just a car there and so I hit them on the way in. That was definitely a tough one there. I feel bad for the team because everyone was doing a fantastic job and the car was fast. Credit to everybody at Chip Ganassi Racing. It’s definitely unfortunate, but we had a good run there.” 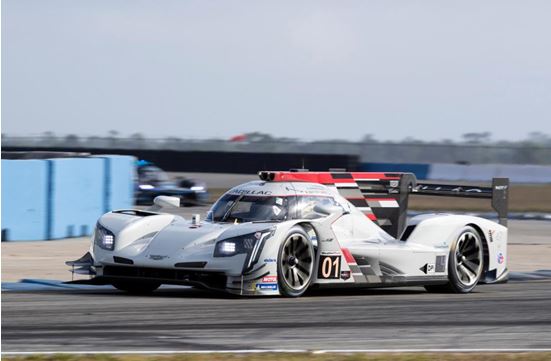 Pipo Derani, Felipe Nasr, and Mike Conway had an eventful race. Derani had the start from pole and was soon overtaken by the No. 01 Chip Ganassi Racing Cadillac DPi-V.R driven by Renger van der Zande. Forty-minutes into the race, Derani tried to retake the lead going into the inside of the entry of Turn 17 and was squeezed into the wall by van der Zande and a GTD car.

The resulting damage and repairs cost the team four laps. The team had made up two laps until with just over four hours to go, Nasr had contact with the No. 5 Mustang Sampling Cadillac DPi-V.R causing another out of sequence stop. With just under two hours remaining, Conway lost drive and stopped out on the track in Turn 7 ending the day for the team.

“The best way to put it is, it just wasn’t our day today,” Nasr said. “It’s hard to believe it all. We’ve got to be realistic. We had a fantastic car all weekend and we dug our own hole. We had to pay the consequences for our mistakes. It was a big setback for the team when Pipo brushed the wall.

The No. 48 Ally Cadillac DPi-V.R started by Jimmie Johnson was a factor for most of the race. Together with Simon Pagenaud and Kamui Kobayashi they were on the lead lap all race. Aside from a spin early by Johnson, the drivers kept the 48 Cadillac competitive all day.

However, the team violated the drive time rule. The official drive time showed that Pagenaud exceeded his allowable drive time. IMSA rules state that one driver cannot drive more than four hours in a six-hour period. The overage was less than a minute. When this happened in the late afternoon the race turned into a test session as they were no longer being scored.

“It was so intense out there all week,” Johnson said. “I can’t put into perspective what I experienced the last two days. I made plenty of mistakes that I need to clean up. I felt like I was in a position to really get aggressive and I just over-stepped a little.

A lot of lessons learned and a good run for this Ally Cadillac team. The team really responded well after my spin and got us back into contention. Simon and Kamui put in great last stints. The drive time penalty negated all of the effort today, but we are a team. We will learn and come back even stronger for Watkins Glen in June.” 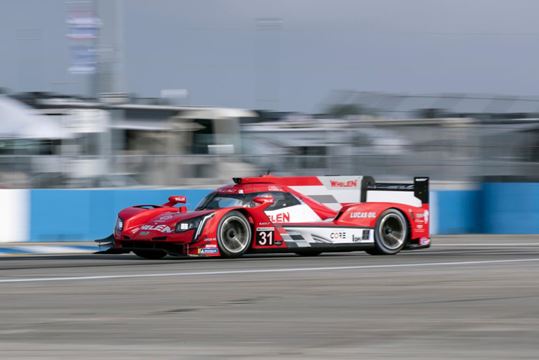 The IMSA WeatherTech SportsCar Championship take a near two month break with the next event being the Acura Sportscar Challenge to run at Mid-Ohio, May 14-16.

In 2019 Konica Minolta Cadillac took the win at the season opening Rolex 24 Hour At Daytona, the Whelen Engineering Cadillac squad followed that up by winning the Mobil 1 Twelve Hours of Sebring. The Mustang Sampling Cadillac team also posted a win at Long Beach on the year.

Additional information can be viewed at Cadillac.com, GM.com, media.gm.com.

Podium Finish for Acura at Sebring


12h Sebring race after around 4 hours – Ticknell in #55 Mazda leads Montoya and Albuquerque, both Acura


Coming off taking a third-consecutive victory in the Rolex 24 At Daytona with a factory team, Justice Brothers will be looking to build on its impressive sports car racing legacy in Saturday’s 69th running of more >>


The 0.001-second margin of victory is the second-closest finish in series history  The Idemitsu Mazda MX-5 Cup presented by BFGoodrich® Tires put on another jaw-d more >>

Largest Porsche Dealership in the U.S. On Board the No. 88 Richard Mille/Champion Porsche 911 GT3 R for Saturday’s Endurance Race Champion Porsche, locate more >>